Encyclopedia of the UN Sustainable Development Goals- Life on Land 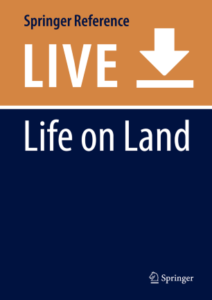 The Encyclopedia comprehensively addresses the Sustainable Development Goals (SDGs) in an integrated way. Each of 17 volumes addresses one of the 17 SDGs. This volume Life on Land addresses SDG 15, namely "Protect, restore and promote sustainable use of terrestrial ecosystems, sustainably manage forests, combat desertification, and halt and reverse land degradation and halt biodiversity loss". We have contributed two chapters: Biodiversity Loss and Countermeasures, and Ecoregions: Mapping Ecosystems to Protect Biodiversity.

Biodiversity it is a relatively recent term, popularized by the book BioDiversity, a collection of papers, edited by E. O. Wilson (1988), from the 1st National Forum on Biodiversity held in Washington, D.C., in September 1986 under the auspices of the National Academy of Sciences and Smithsonian Institution. The stellar ascent of the term is illustrated by the results of a Web of Science search that reveals zero entries for “biodiversity” as a topic in 1985, 1,321 entries in 2000 and 12,493 entries in 2018. Thus, the term has become ubiquitous. Notwithstanding the general usage of the concept of biodiversity, there are nuances in how the term has been interpreted. Initially, the term encompassed a static inventory with different hierarchical levels from genes to ecosystems (Takacs 1996). At around the turn of the century, the term was expanded to include the complex and dynamic interactions of evolutionary and ecosystem processes (Norton 1996; Takacs 1996). The processes that lead to biodiversity, maintain it, and assure ongoing evolution are now part of our understanding of the concept. The topic biodiversity loss and countermeasures cover all aspects of the biodiversity crisis. The crisis has reached such high levels that the process for a formal declaration of a new geologic epoch, the Anthropocene, has been launched by the Anthropocene Working Group of the International Commission on Stratigraphy (Subramanian 2019). This chapter attempts to give a broad overview on this vast topic, ranging from ecosystems and habitats to species and populations and to genetic diversity.

Ecoregions are geographic regions of the world that indicate the distribution of ecosystems (see Chapter “Terrestrial Ecosystem”) and plant and animal communities. They have been variously defined according to the specific purpose of specific regionalization approaches. Omernik and Bailey (1997) have defined ecoregions in very broad terms: “Ecological regions, at any scale, can be defined as areas with relative homogeneity in ecosystems. Our intent has been to depict regions within which the mosaic of ecosystem components (biotic and abiotic as well as terrestrial and aquatic) is different than that of adjacent regions.” Bailey (1998) defines ecoregions as “any large portion of the Earth’s surface over which the ecosystems have characteristics in common.” They are understood as macroecosystems, the “largest regional-scale ecosystem units,” corresponding “to the large climatic regions where climatic conditions are relatively uniform” (Bailey and Ropes 2002).They are distinguished from bioregions and other biogeographic units by including both biological and abiotic features. Specifically, the boundaries of ecoregions are defined by the factors that control ecosystem distributions rather than the present distribution of biota, which are constantly changing due to disturbance and succession of plant communities (Bailey and Ropes 2002). Bailey and Hogg (1986) produced the first global ecoregion map. The main advance of this global map was the introduction of higher-resolution, spatially explicit boundaries compared to the earlier and pioneering maps of global biogeographic provinces by Dasmann (1972) and Udvardy (1975). Based on the world’s biotic province maps (Dasmann 1972; Udvardy 1975) and previous extensive research in classic biogeography, theWorldWildlife Fund (WWF) defined ecoregions specifically as units for conservation action: “relatively large units of land containing a distinct assemblage of natural communities and species, with boundaries that approximate the original extent of natural communities prior to major land-use change” (Olson et al. 2001). Importantly, the geographically distinct assemblages of biodiversity aim to include all taxa, not just vegetation. The terrestrial map of WWF ecoregions (Olson et al. 2001) was followed by maps for freshwater (Abell et al. 2008) and nearshore marine (Spalding et al. 2007) environments (Fig. 1). Since various quantitative ecoregion definitions have been introduced on regional scales, they often do not consider natural communities. For example, Ergüner et al. (2019) used Multivariate Spatio-Temporal Clustering of ten ecoclimatic variables to define ecoregions and to compare their distributions and characteristics under climate change for contemporary and future periods for Turkey. Sano et al. (2019) used remote sensing data, geomorphology, vegetation, soil, geology, and information on flora features to define ecoregions and their boundaries in the Brazilian Cerrado. McDonald et al. (2005) suggest the development of different sets of ecoregions based on specific taxonomic groups or ecological processes for conservation planning. While the general concept as units of regionalization of ecosystems is common to all definitions of ecoregions, they differ in their focus on which ecological processes and taxonomic groups to utilize for their identification and the delineation of boundaries.